Let’s be honest, there’s little that compares to the hunt.

But, the range is pretty close.

Beating through the bush, stalking your prey, and taking the responsibility of the kill elicits a purpose and rush that’s hard to replicate anywhere else.

However, I still love the range. The atmosphere, the noise, the smell of smoke hanging in the air, it all feels right.

Plus, going there regularly can make the hunt better. The best days at the range leave you with a feeling of accomplishment — that you did more than just wearing out your trigger finger.

There are several things I do to use my time at the range effectively.

Making sure your scope or iron sights is properly zeroed is one of the easiest things you can do to make sure your hunt goes smoothly. Shooting is no fun when you can’t hit your target. Hunting is a lot less fun when you need to chase a white-tail for several hundred yards until it bleeds out because you missed.

Making sure I have the gun zeroed at 100 yards, and specifically that I have it zeroed with the same ammo that I’m going to be hunting with, is a key discipline.

Not only is it important to know where it’s going to shoot at a 100 yards, but it’s equally important to know how that shot is going to change at different yardages. Whether you come upon a buck that’s 25 yards away, or 230, you won’t get much chance to adjust in the field. Knowing how much drop, or rise, you’re going to get at different yards can make your hunt that much easier.

However distance isn’t the only thing affecting the accuracy of your rifle. Small changes like using a strap to hold steady instead of a rest, or shooting standing up instead of sitting down can throw your shot off by several inches at 100 yards.

The range is the best place to learn where your gun is going to “miss” to when these slight adjustments occur. Practice shooting standing up, sitting, kneeling and whatever other position you think you could be shooting from so you know the different ways your gun will react.

It can even be a good idea to forgo the rest altogether in favor of using the strap, as you’ll regularly miss by an amount you can adjust for.

Ultimately it’s down to personal preference, but the range is just the place to test out different things and see what you like.

Rather than just focusing on putting enough lead downrange that I start to hit the bullseye, I like to focus on the mental aspect of shooting while I’m seriously practicing: mentally going through the whole process of taking a shot on a deer.

This means taking longer on each shot, maybe getting up and walking around after I’ve taken a shot, resighting each time, and focusing on my breathing. Generally, I try to treat each shot as if it’s the only one I got. On the range, I may be able to put 25 shots in the same hole once I’ve been there for an hour. On the hunt, I don’t have an hour to warm up.

How do you prepare for your hunt when you’re on the range? Let us know in the comments down below.

About the Author: Ed Maciorowski 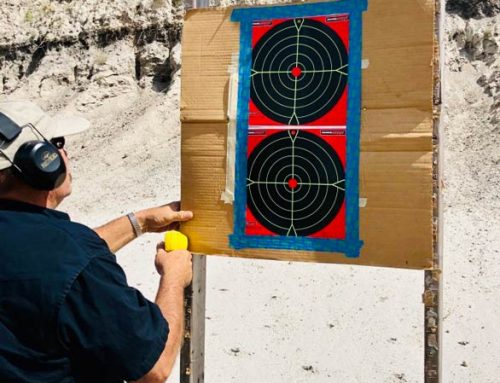 How I Zero My Rifle